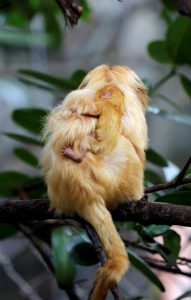 Tamarins are squirrel-size monkeys with a golden ruff resembling a lion’s mane. At birth, the golden lion
tamarin is fully furred with eyes open. It clings to its mother for the first few weeks and nurses for 90
days. At about five weeks, it begins to experience things independently. Zoo staff have not determined
the baby’s sex yet. Zoo visitors can spot mom and baby in the Faces of the Rain Forest exhibit.
Native to the tropical forests of Brazil, the golden lion tamarin is listed as Endangered on the
International Union for Conservation of Nature and Natural Resources (IUCN) Red List. The destruction
of ninety percent of the Atlantic coast’s forests for logging and development has played a significant role
in its current endangerment.

According to Amy Roberts, the Zoo’s director of animal programs, “Golden lion tamarins are one of 50
species we have here at the Zoo managed under the Species Survival Plan (SSP). The Zoo is one of 150
worldwide participating in the golden lion tamarin SSP.” Roger Williams Park Zoo is a leader in conservation projects and is the recipient of numerous awards for conservation work done locally and around the globe and maintains a reputation as a leader in conservation efforts. 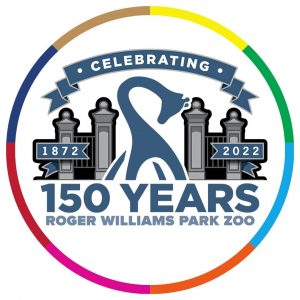 Roger Williams Park Zoo is Rhode Island’s number one outdoor family and tourist attraction and a leader in conservation efforts undertaken by a zoo of its size. As leaders in conservation and animal care – we create engaging experiences that empower guests to join us in conserving wildlife and wild places. Roger Williams Park Zoo is supported and managed by the Rhode Island Zoological Society and is owned by the City of Providence.

Don’t miss a thing, sign up for the WCKC e-newsletter!