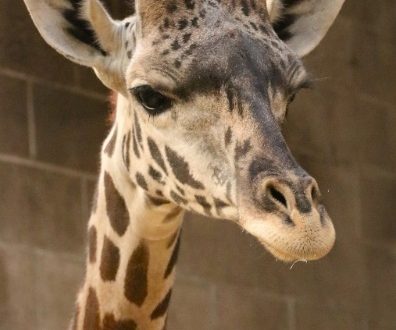 Masai Giraffe Calf Arrives at RWP Zoo! Providence, a 20-month-old Masai giraffe, has arrived at Roger Williams Park Zoo. Coincidently, she comes from the Greenville Zoo in SC, which had already named her Providence before learning that she would be moved to Providence’s Zoo.

The Zoo was selected as a part of a breeding recommendation based on the Species Survival Plan (SSP) for Masai giraffes. The SSP is a vital initiative created by the Association of Zoos & Aquariums, in which they assign certain animals from a particular species to other potential mates at zoos across the United States and overseas. This process ensures that endangered species, like giraffes, maintain a genetically diverse and biologically sound population.

According to the International Union for Conservation of Nature (IUCN), the Masai Giraffe population has declined by 49-51% in the past 30 years. There are roughly 35,000 left in the world, with their population decreasing steadily.

Providence is a quirky, unique calf still trying to get her footing at the Zoo. Amy Roberts, deputy director of animal programs at the zoo says, “she’s a brave, bold, sassy little girl. She came right up to us on her first day to eat her grain from a bucket. She wants to play with our other female giraffe, but they are still getting to know each other. ”

Roger Williams Park Zoo is happy to welcome Providence to their Zoo family and looks forward to the Providence community welcoming her.

Roger Williams Park Zoo is Rhode Island’s number one outdoor family and tourist attraction and a leader in conservation efforts undertaken by a zoo of its size. As leaders in conservation and animal care – we create engaging experiences that empower guests to join us in conserving wildlife and wild places. Roger Williams Park Zoo is supported and managed by the Rhode Island Zoological Society and is owned by the City of Providence.