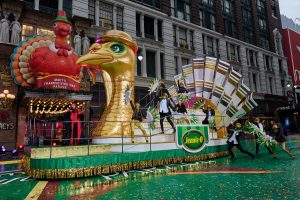 Macy’s is once again ready to deliver a dazzling spectacle featuring its signature mix of
giant character balloons, floats, marching bands, performance groups, clowns, music stars and
the one-and-only Santa Claus. Macy’s Balloon Inflation will return to the Upper West Side of Manhattan the day before Thanksgiving; Public viewing on Thanksgiving Day will be available along the traditional 2.5-mile Macy’s Parade route.

FLOATS:
• Floats – 28, comprised of hundreds of different set pieces and other structural elements
• New floats – This year five new floats will debut including Baby Shark by Pingfong and
Nickelodeon; Geoffrey’s Dazzling Dance Party by Toys“R”Us; People of First Light by Macy’s;
Supersized Slumber by Netflix; and The Wondership by Wonder.
• Length and height of largest float – 60 feet long and 3.5 stories tall (Santa’s Sleigh)

ENTERTAINMENT, PERSONALITIES & PERFORMERS:
• Performance Groups – The 96
th Parade will feature performances from the dazzling dancers of Ballet Hispánico’s School of Dance, the hilarious Big Apple Circus, the rhythmic movement of Boss Kids, the artistry of the Fusion Winter Guard,two-steps and high kicks from the Kilgore Rangerettes, the puppeteering skills of Phantom Limb, the iconic stepping of The Sigma Gamma Rho Centennial Steppers, the energetic moves of the St. John’s Dance Team, and the exuberance of Spirit of America Cheer and Spirit of America Dance Stars.
• Radio City Rockettes® – An annual favorite, they first performed in the 1959 Parade 2
• Broadway musicals – Lea Michele and the cast of Broadway’s Funny Girl, with additional Broadway
performances from showstoppers A Beautiful Noise, Some Like It Hot, and in celebration of its 25th
anniversary, Disney’s The Lion King to celebrate Macy’s long-standing relationship with Broadway,
which has been an annual tradition dating back to 1977.
• Additionally, the cast of Fraggle Rock: Back to the Rock, on Apple TV+, will appear throughout the
broadcast.
• Macy’s Singing Christmas Tree – 60 members join a specially created choir filled with Macy’s
colleagues from around the nation
• Santa Claus – the ONE and ONLY in his famed Parade finale appearance

To safely produce the annual Thanksgiving Day event, Macy’s once again partnered closely with the City and State of New York to create a production plan that would ensure health and safety practices aligned with CDC guidelines, as well as current local and state government protocols.