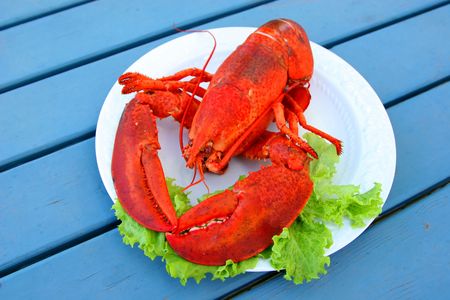 Have you been to any of them? Let us know about your experience in the comments below! All are open for the 2022 season unless noted below.

Arnold’s Lobster & Clam Bar
Eastham, MA. 508-255-2575
Touristy though it may seem, Arnold’s is the place to go for succulently steamed lobster on the Cape. Owner Nate Nickerson III keeps the lines moving while serving more than a thousand customers on most summer days: lobster rolls, of course, but also crab cakes topped with guacamole and summer salsa.

Chauncey Creek Lobster Pier
Kittery Point, ME. 207-439-1030
This delightful waterside eatery, worlds away from the outlet-mall crowds of nearby Kittery, sits on a 200-foot-wide planked pier astride a broad tidal creek. With its colorfully painted picnic tables and a bird’s-eye view of continuously passing watercraft, Chauncey Creek is a great place to BYOB and tuck into meaty, fresh lobsters imported daily from Canada’s cold waters.

Abbott’s Lobster in the Rough
Noank, CT. 860-536-7719
Abbott’s cooks its lobsters via the low-steaming method, in massive cast-iron vaults, to seal in all the crustaceans’ natural flavor. Dine next to the scenic harbor on a dock where striped bass feed on chowder crackers below. Abbott’s is also famous for its hot, buttery lobster roll–the version that’s a Connecticut original.

Thurston’s Lobster Pound
Bernard, ME. 207-244-7600
Housed on a two-story, screened-in deck overlooking scenic Bass Harbor, Thurston’s is tops for off-the-boat-fresh lobster on Mount Desert Island. There’s a commercial boat dock next door where lobsters are brought in throughout the day, then boiled in a massive outdoor cooker right outside Thurston’s front door.

The Clam Shack
Kennebunkport, ME. 207-967-3321
Don’t let the name fool you: There’s plenty of good lobster to be had at The Clam Shack. Owner Steve Kingston makes what may be the best lobster roll anywhere in his tiny riverside shack in downtown Kennebunkport. The lobster meat is picked fresh daily and kept ice-chilled until served on a toasted, lightly buttered burger bun.

Roy Moore Lobster Company-Appears to be closed in 2022. Check their website for updates
Rockport, MA. 978-546-6696
This may be the friendliest lobster shack anywhere. Housed in a diminutive shingled building on Rockport’s Bearskin Neck waterfront, Roy Moore Lobster cooks its crustaceans continuously throughout the day, so there’s rarely a wait for a fresh-cooked meal. Start with owner Ken Porter’s thick, creamy clam chowder, and dine atop wooden lobster crates on the crowded yet friendly back deck.

Brown’s Lobster Pound
Seabrook, NH. 603-474-3331
Perched over the tidal Blackwater River near Seabrook’s inviting beach, Brown’s has been serving up fresh boiled lobster for more than 50 years. The timber-frame dining hall is a great place to feast on lobsters, fried clams, lobster rolls, and creamy, spicy lobster bisque. The summer sunsets off the back deck are not to be missed.

The Place
Guilford, CT. 203-453-9276
This is just about the only place anywhere that steams and then roasts its lobsters over an open-air, wood-fed firepit. The flavor is as unique and delightful as the tree stumps that serve as seats around brightly painted wooden tables. Two other must-haves from the firepit here are the roasted clams and the flame-roasted corn on the cob.

Shaw’s Fish and Lobster Wharf
New Harbor, ME. 207-677-2200
A bit off the beaten path, Shaw’s Lobster Pound in New Harbor is worth the trip. The lobster is “wicked” fresh, and their deck seating consists of picnic tables overlooking a picturesque harbor. The accommodations are casual, and the locals will tell you that this is the real lobster-eating deal.