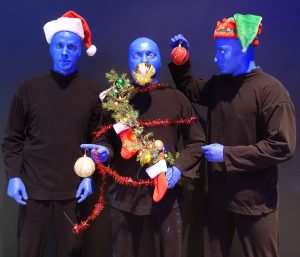 Blue Man Group Boston will be decking the halls in December with holiday elements added to the show, seasonal craft activities for kids and an extended performance schedule.

From December 15th -December 30th, there will be 31 shows with seasonal elements added to the performances including holiday music using the group’s unique musical instruments. From December 23rd – 31st there will also be added matinees including an 11 am and 2 pm show on certain days.

To get in the holiday spirit and for the youngest fans, Blue Man Group will have a seasonal craft activity in their lobby from December 15th- December 24th. For those 21+, the bar at the Charles Playhouse will also be creating festive seasonal libations available during the holiday shows.

And for a New Year’s Eve celebration that the entire family can enjoy, the four shows on December 31st (11 am, 2 pm, 5 pm & 8 pm) will feature party favors and a special musical performance by the Blue Men and the 8:00 pm show will also include a “countdown” by the Blue Men and band to ring in 2023. 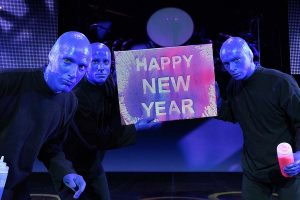 “This time of year is always fun around here because we have more shows and enjoy entertaining all the people that come into the city to enjoy the holidays,” said Jonathan Screnci, Blue Man Group Boston Company Manager. “Our New Year’s Eve shows are really popular with families who may not stay up until midnight and also couples and groups who may have other late-night plans, so we offer everyone a chance to celebrate throughout the day in true Blue Man style.”