10 Children’s Books to Celebrate Women’s History Month. Adding to the books we borrowed or purchased in February for black history month, we are now looking more specifically at the great women in our history. Get that holds list at the library out! We have 10 books for ages 0-16+ to honor Women’s History Month – not just in March but all year long.

(Note: All links will refer you to bookshop.org in support of independent bookstores. We encourage you to browse local bookstores bookshop store fronts here as well.)

A is for Awesome! 23 Iconic Women who Changed the World

By Eva Chen, and suggested for ages 1 – 3. From Amelia (Earhart) to Malala to Tina (Turner) to Ruth (Bader Ginsburg), this book introduces young readers to fabulous women who are changing the world for the better. So I will certainly be adding this to our library holds list! 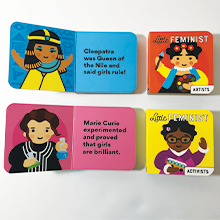 By Emily Kleinman, and suggested for ages 0-3. Mudpuppy’s Little Feminist Board Book Set is comprised of colorful illustrated portraits of real women who have made historical impact on the world. Because of the beautiful illustrations and powerful words, young children are introduced to these important people in history with images that are fun for youngsters and also realistic.

Brave Girl – Clara and the Shirtwaist Makers’ Strike of 1909

By Michelle Markel, and suggested for ages 4 – 8. This picture book tells the true story of the young immigrant who led the largest strike of women workers in U.S. history. Because of its topics, readers suggest this as a great addition to a home schooling library!

By Malala Yousafzai, and suggested for ages 4-8. I get so many great questions when we read this book about girls going to school in history and in present day around the world. My daughter’s questions cause us to discuss heavy topics like what is the power of learning and education, and why do some people want to keep girls from being educated? For older readers, try I am Malala, a wonderful memoir targeted to middle grade or young adult readers.

Who Says Women Can’t Be Doctors?: The Story of Elizabeth Blackwell 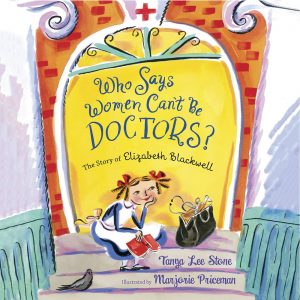 By Tanya Lee Stone, and suggested for ages 5 – 9. This nonfiction picture book tells the inspiring story of Elizabeth Blackwell, the first female doctor. Some women could be teachers or seamstresses, but career options were few. Certainly no women were doctors. But Elizabeth refused to accept the common beliefs that women weren’t smart enough to be doctors.

Amelia to Zora: Twenty-Six Women Who Changed the World by Cynthia Chin-Lee

By Cynthia Chin-Lee, and suggested for ages 8 – 12. Twenty-six amazing women; twenty-six amazing stories. From Amelia Earhart, pilot and adventurer, to Zora Neal Hurston, writer and anthropologist, learn about the hardships and triumphs that inspired each woman to change the world around her. Detailed collages and illustrations draw from various events in the women’s lives.

By Kate Schatz, and suggested for ages 8 – 16. This book is structured like a children’s A-Z book but reads more like an encyclopedia of amazing American women. This list of great women spans several centuries, multiple professions, through 26 diverse individuals. There are artists and abolitionists, scientists and suffragettes, rock stars and rabble-rousers, and agents of change of all kinds.

By Anne Frank, and suggested for ages 10-13. This diary is a famous work of literature that brings middle grade readers into the life of a thirteen-year-old Jewish girl and her family fled their home in Amsterdam and went into hiding. Although the backdrop is the devastating time period of the holocaust, she talks mostly about her family relationships, her dreams, her private struggles – a classic piece of writing everyone should read. 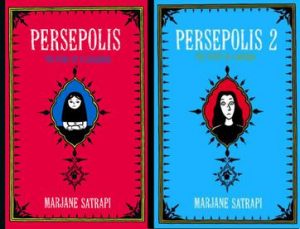 By Marjane Satrapi, and suggested for ages 13+. In powerful black-and-white comic strip images, Satrapi tells the story of her life in Tehran from ages six to fourteen. Because these years that saw the overthrow of the Shah’s regime, Satrapi instructs the readers about the Islamic Revolution, and the devastating effects of war with Iraq.

Our Stories, Our Voices: 21 YA authors get real about injustice, empowerment, and growing up female in America

Edited by Amy Reed, and suggested for ages 13+. This collection of twenty-one essays from major YA authors touches on a powerful range of topics related to growing up female in today’s America, and the intersection with race, religion, and ethnicity.

Our list for Black History Month features more great books and many focus on great black women in history! So check out that list here.